MY   OWN   GAMEBOOK   ADVENTURE

Here are some pages from my own mini- adventure written way back in the 80's.

Its quite similar to the more recent adventure   RETURN  TO  THE  ICEFINGER MOUNTAINS  as seen in Fighting Fantazine  issue 9. 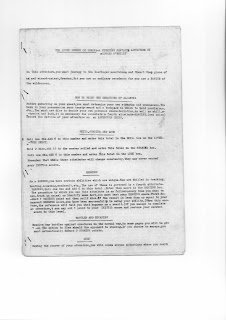 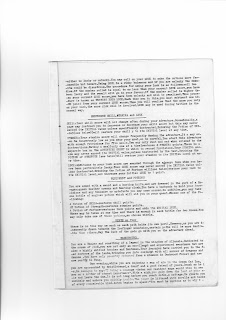 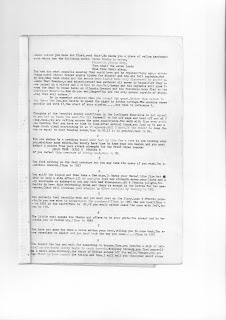 As you can see from this last page,  I had theorized that some of  the Snow Witch's slaves had been unable to escape from the caverns. 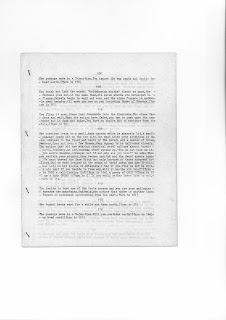 PORT OF PERIL - MY REVIEW

I  recently received   PORT   OF   PERIL   as a birthday gift   so I finally got around to a belated read  /  play through and as promised  ,  here is my review 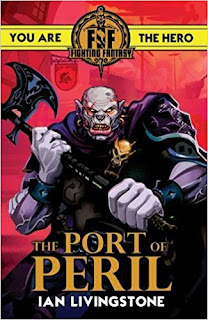 Art  by  Robert Ball and quite a striking cover in fact,  certainly superior to the inside art.   I'm assuming this shows one of   Lord  Azzur's  troll guards.   The  titular port refers of course to Port Blacksand.


The interior art is more problematic.   Minimilist  art style is one thing but its quite another to obscure someone's face as seen in this illustration of   Hakasan  Za :

You can just about make out her face but whats the point of  creating a new companion  /  character if you cant properly see them  ?

As for the adventure itself,   I enjoyed  it a  lot  more than I expected to.    Well written,  fast moving and steeped in  the lore and history of  FF.   However,  it may have been just  a little too easy to complete.    Although there are many dangers to overcome ,  there is none of the fiendish numerical tests and wordplay from the vintage  FF  books.    True,  you need to have a lot of   '   shopping list  ' items in order to proceed at specific times  but its much easier to just pretend you have said items than  being told to solve an equation or add numbers together.


I also wished  Ian had invested more character into  the villains as much as he does the good guys.  Zanbar Bone isn't a character at all,  just a boss monster who appears at the end to be bumped off.


And the infamous  Lord  Azzur  remains  an enigma and a mystery as we see no more of him nor learn no more about him than we did in  CITY  OF  THIEVES.    And why would he ally himself with Bone,  as surely that would undermine his own rule   ?    And its news to me that Bone was once human as  Ian  never mentioned this before.   Its almost as if  he were retroactively re-writing the history of  FF.


At times,   POP  almost feels like an homage to  FF   rather than a proper  FF  adventure with copious references to the past,  almost a greatest hits package  if you will.    That said , its extremely well written and cleverly plotted,  a real page turner as they say.


And any veteran FF fan will feel a warn glow upon reading  Yaztromo's  final words which brings POP  to a perfect close.


Although I found the timeframe somewhat confusing.   Going by the encounter with  Bignose,  are we to assume that  this adventure takes place  concurrently  with   FOREST  OF  DOOM   ?    But surely it takes place   AFTER    City Of Thieves    ?


A few plot elements also bothered me.    It doesn't make sense to me why  Gurnard  Jaggle would leave booby trapped chests for other fortune hunters.    And why are you foraging for scraps in Chalice when you are supposed to start the adventure  with 10 meals  ?


But these are minor quibbles because overall,   Port of Peril  is  a good, solid, old school   FF adventure.   And one which I thoroughly  enjoyed.


I  hope you have enjoyed reading my review just as much  ! 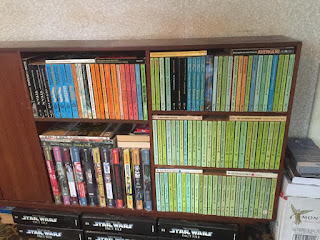 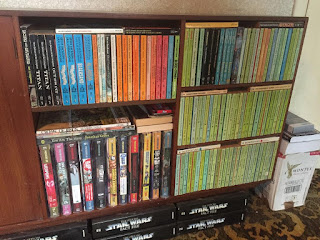 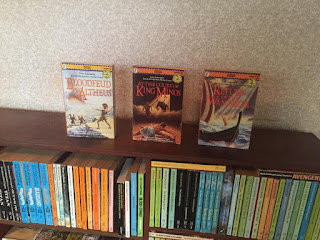 MORE ON THE ARCHMAGE

Further to my previous post on the Archmage,  here is some strong pictorial evidence as to his true appearance : 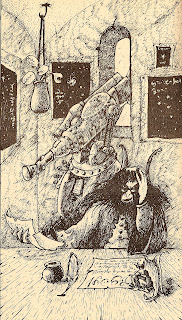 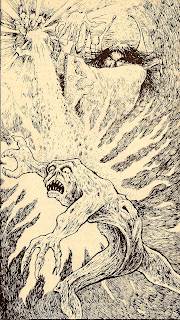 and here he is on the cover  : 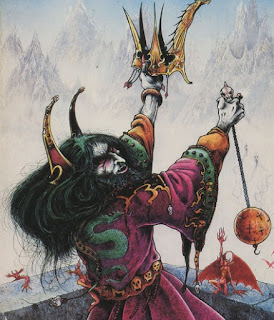 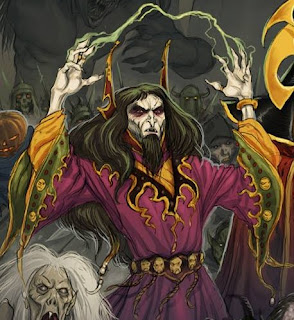 THE CANDLE OF ETERNITY

In my previous post,   I discussed references that end  with a full stop and here is a perfect example.


You find yourself in a large well lit room.   At the centre of the room is a table upon which rests a red candle.  All around you are shelves piled high with food stuffs, weapons and all manner of knick-knacks.   It  almost seems too good to be true and perhaps it is.


You move to investigate the treasure on the shelves but instead find yourself looking at the candles flame.   It burns a bright yellow and fills the room with its intensity .   Your life is now in immediate danger and you must test your  WILL POWER.


If your dice roll is less than your  WILL POWER,  you break free of the candles hold and go on to explore the room.


However,  if your roll was higher,  this is what happens :


You try to resist the lure of the candle but its no use.  Its yellow light grows larger and larger , filling  your world.    You no longer possess   physical form as your life force has now been absorbed into the candle where you will spend the rest of your existence.   Where you will join all those who have succumbed  to  the   Candle  Of   Eternity.

THE MOST DREADED REFERENCE OF ALL

So what is the most dreaded reference of them all   ?


Is it the one where you round a corner only to be confronted by a giant spider  ?


Or the one where you are told that you have caught some terrible disease  ?


No my friends,  its none of the above.


That's  when you know that your adventure is over.


That you have hit the brick wall.


That you have gone over the cliff and are falling forever into  the abyss of despair.....


And there is something even worse than the full stop.


Think of all those gruesome deaths in the FF series.  The mirror demon in  Deathtrap  Dungeon.  The fatal bite from the  Serpent  of  Time.   All of those moments when you realise with horror that you made the wrong move or took the wrong path.


No wonder the five finger bookmark was invented.


Now imagine if you really  WERE  in those scenarios.   Think of how you would feel at the thought of your impending doom.


That's why no monster or creature could ever equal the sheer terror  of the reference that  simply ENDS.

By any standard,   the  SORCERY epic  is an extraordinary achievement.


The mind boggles at how  Steve  Jackson  tied it all together.


There is no waste  here,  nothing is superfluous.    Every place and every character has a purpose , all part of a larger world which exists beyond the actual pages of this 4 book series.


For example,  a seemingly  trivial  locket you find in book 1 becomes very useful indeed in book 4.


I could devote an entire blog just  to  SORCERY  alone and maybe one day I will.


But for this post,  I want to focus on a mystery which has vexed me for so long.


Who or what is the Archmage  ?


First of all, what exactly is an Archmage  ?    It seems to be a very grand and lofty title to bestow upon oneself.


Is he above all the other common  garden variety  mages   ?


At one point in the Seven Serpents,  he is mistakenly referred to as the Archduke.


Here's the thing I don't get  -   the Archmage has been built up as this ultimate villain who lives in a fortress filled with hideous death traps,  creatures plus a army of guards.   And I assume he must be a powerful mage or wizard.


And what does he do  ?    He disguises himself as old man in long johns and waits to bash you over the head with a chamber pot and then tricks you into entering his own prison.


His modus operandi is bizarre to say the least  !


And what is his  true appearance   ?


Clearly,  Steve Jackson didn't want to go the obvious route and spell it all out for the reader but by god,  its bloody confusing  !


I had always assumed  that the wizard on the cover of   Crown  Of  Kings  was the  Archmage  but the  Crown  Of  Kings  Companion identifies him  instead as one of the Archmage's lackeys.   And yet the  TITAN  guide  had clearly shown the same person duelling the  Hydra   (   from which he creates  the 7 serpents   )


There is also a theory that the Archmage  is the wizard who originally first cast the ZED spell and was never seen again.


Does he actually have his own body or he is just a spirit inhabiting the body of  Farren Whyde   ?


There is an option at the end of  Crown  Of  Kings   to revive  Farren  Whyde  from the dead  which suggests he is a separate person.


And what's going on with that hell demon at the end of   Crown Of  Kings  ?


As I said before , all very confusing and  I'm still no wiser as to the true form and identity of the Archmage.


Answers on a  postcard  please.